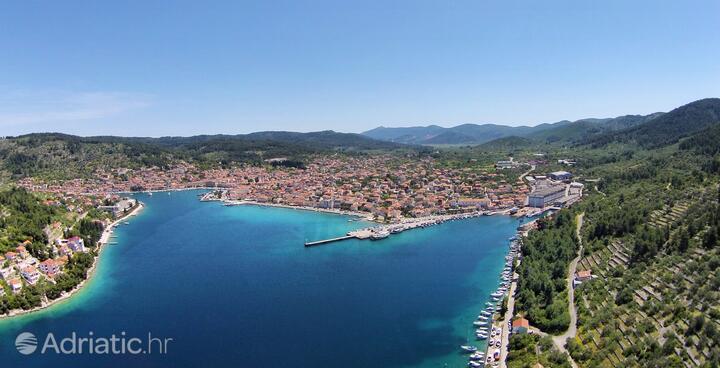 Vela Luka, the largest town on the island of Korčula, is tucked inside a long, narrow bay, at the end of which the grand harbor which gave the town its name awaits ("luka" meaning harbor and "vela" being a form of "velika", grand). Sea lovers will be enchanted by the indentedness of its coastline, with innumerable coves springing up on all sides. The centuries of symbiosis between man and nature have bequeathed the area's untouched beauty for the coming generations. Vela Luka carefully nurtures the tradition of choral folk singing, and has been known to win many a visitor over with the melancholy sounds of old, emotional melodies.

An astonishing fact about Vela Luka is that the town and its surroundings have been inhabited continuously for as long as eight and a half thousand years! The first settlement is found in the Vela spila (the Grand cave) atop a nearby hill, while the Cultural center of Vela Luka houses the most representative samples of local archeological finds. The Modern gallery contains numerous paintings and sculptures from throughout the twentieth century, the stand-outs being the works of the famous English sculptor Henry Moore.

At the western end of Korčula, numerous small churches attest the spiritual life of the local population. The parish Church of Saint Joseph is particularly notable for its beauty. In the rows of stone houses, small surprises spring up in the shape of hidden chapels with intriguing bell towers and Baroque rosettes.

Beaches concealed in thick pine woods reveal the criscrossing footpaths of the islet Ošjak, a place well-known from many songs and poems. Another islet, Proizd, welcomes you to its award-winning beaches of white rocks and turquoise waters.
Vela Luka has a great reputation for klape - a capella choirs which sing traditional Dalmatian songs. The eagerness to keep this tradition alive is reflected in the numerous prizes won by local choirs for their skill. The Luško lito (Luka summer) with its melancholy sounds will seduce you into forgetting daily life and reveling in the heavenly ambience of this island town.

Vela Luka, Korčula - What to do, what to see?