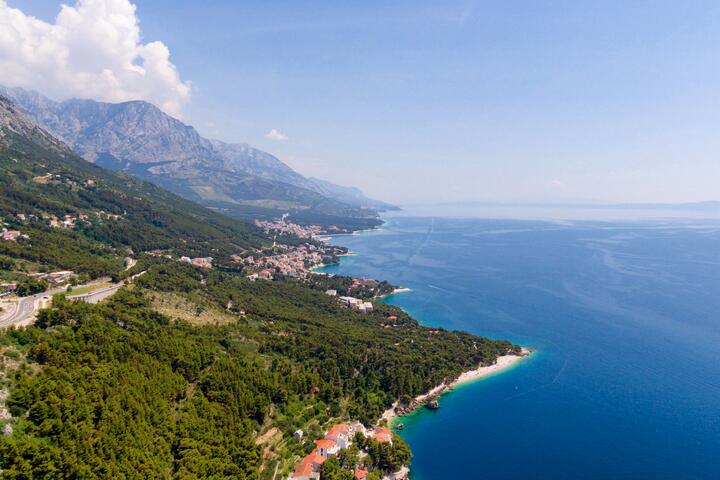 The charm of Brela arises from its favorable placement, embraced by the sea and Mount Biokovo. The long beaches squeezed in this narrow strip of land are covered with shingle and watched over by figs, olives and pines. The environmental appeal of the beaches has been confirmed by the successive awards of the Blue Flag, and by numerous reputable magazines naming them the most beautiful in Europe.

Visitors to Brela on the loookout for an adrenaline rush need go no further than Mount Biokovo. Accept the challenge of nature and spend the day climbing, exploring caves, or try your hand at paragliding.

The footpaths of Brela

Brela can be explored along its many footpaths, either along the coast, or leading up to the heights above the town. The Biokovo park of nature will show off its wealth of karst land formations, plant and animal life which inhabit it, and the ruins of Herceg tower, once part of the defense against the Turks.
An impressive sight in Brela is the botanical garden in Kotišina, whose wealth of floral color is washed, during the rainy season, by the drops falling from the Proslap waterfall.
Info boards set along the Pathways of ancient Berulia tell the tale of the foundations of a fortified town in the beginning of the tenth century, the precursor of Brela.

The fame of Brela's long beaches runs far and wide. On the best-known Punta Rata beach, Kamen Brela, or the Brela Rock, is nested amidst the waves. The picturesque grey boulder overgrown with trees and brush has become a recognizable symbol of Croatian tourism, and its unusual appearance and location have provoked many arguments as to its origin.
In the search for your very own "slice" of the sea you are sure to discover another well-known Brelan - the downy oak. This grand monument of nature has been spreading its canopy above the waterline for centuries, far from the usual habitats of its kindred.
Diving enthusiasts should not miss the Vruja, a submerged part of the cliffs of Biokovo, the home to diverse marine flora and fauna.

Brela, Makarska - What to do, what to see?