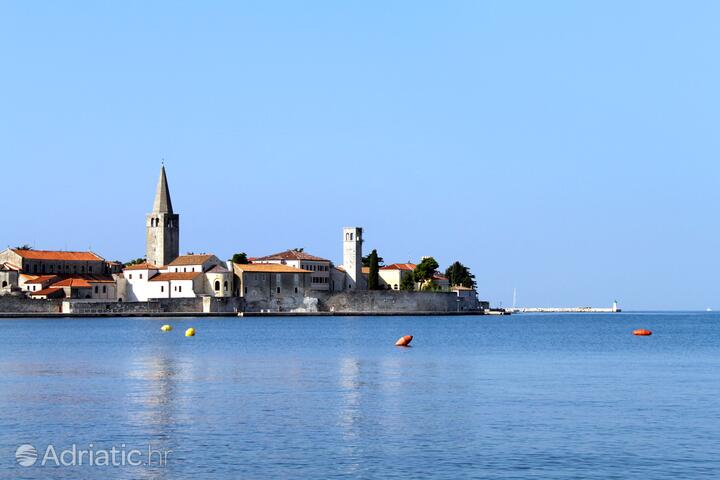 The single most popular summer destination in Croatia is the town of Poreč. It has been a major port of call for pleasure yachters as early as the year 1844. This long-time favorite of European aristocracy now attracts increasing numbers of tourists, eagerly flocking to the capital of Croatian tourism. The variegated past is concealed among its authentic Roman streets and the Euphrasian basilica, protected by UNESCO. The sounds of the Mediterranean await in Poreč, inviting everyone to a marine adventure they can try for themselves.

Poreč gilded with mosaics of the past

In an open "gallery" of the old town core, Poreč proudly displays its UNESCO-protected basilica. Built in the sixth century during the reign of the bishop Euphrasius, its namesake, the basilica is the town's most important decoration, delighting visitors with the golden sheen of its impressive mosaics.

A stroll along the stone-paved streets, still with the same Roman names as they were 2000 years ago, takes one to Marafor, the site of an ancient forum surrounded by the remains of temples. Poreč's "galllery" of historical monuments continues with three towers, all that remains of medieval defensive walls which had surrounded the town between the twelfth century and the nineteenth.

Visitors to Poreč will likewise be charmed by the Romanticist, Gothic and Baroque aristocratic villas, which will sprout up everywhere while they are getting to know the beauties of the town. One of the most beautiful palaces now contains the oldest museum in Istria - the Heritage museum of the Poreč region. Since the year 1884, it has lovingly held onto the collection of Poreč's history and culture.

The summer Poreč in a sea of folk melodies

During the summer, musicians from all over the Mediterranean gather in Poreč as part of the Golden sopile international folk festival. This colorful gathering features a blending of the heritage of Mediterranean cultures found on three different continents.

The Euphrasian basilica in the summer nights becomes a gilded stage for classical music concerts, the sounds of which flow along the streets of the town. Nor are they the only ones: the streets resound with the Street art theater festival, and there are also the familiar voices of traditional choirs.

Poreč is also a city of sport. Aside from the various sporting tournaments, the biggest attraction for visitors is the well-known Dolphin of Poreč - a swimming marathon where everyone can participate.