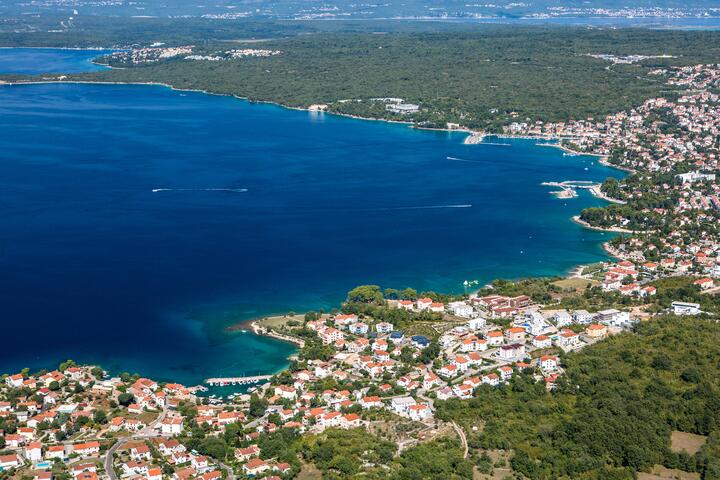 Life in the Mediterranean town of Malinska, named after a fifteenth-century mill (=malin), has always been centered around curious small churches, which have amassed considerable artistic wealth over the course of centuries. The amazing coloring of Krk island continues on the gorgeous beaches with their mesmerizing scents of untouched flora, which eagerly await their many new and returning visitors.

Malinska - a gallery of small churches

The scented Mediterranean shrubbery which strives for a place in the sun amidst the traces of Christian past is Malinska's charming welcome to those who come to explore its wide bay. Fifth-century remains of sacral buildings still rest in the shade of Cickini forest, in whose green embrace lies Malinska.

An aroma of the past spreads outside the boundaries of the town, all the way to the fifteenth-century Church of Saint Mary Magdalene, whose monastery includes a sacral art museum and interesting ethnological collections.

Much like its past, the present of Malinska was built around sacral architecture. The new church of Saint Nicholas stands out in the town center, its chambers often doubling as art galleries and exhibition spaces.

In the summer season, Malinska becomes a stage for classical music and the folklore melodies of Krk island. Other than the traditional choral singing and fishermen's feasts, Malinska is also known as an attractive destination for recreational athletes.

The town's green surroundings are picture-perfect for long walks or cycling quests which will reveal the stunning scenery of the island of Krk.

Naturism lovers will find what the name suggests at Paradise beach, and an idyllic setting is guaranteed by the Blue flag flying above Rupa beach.

Malinska, Krk - What to do, what to see?

Search - Malinska
Live Chat Can we help you?