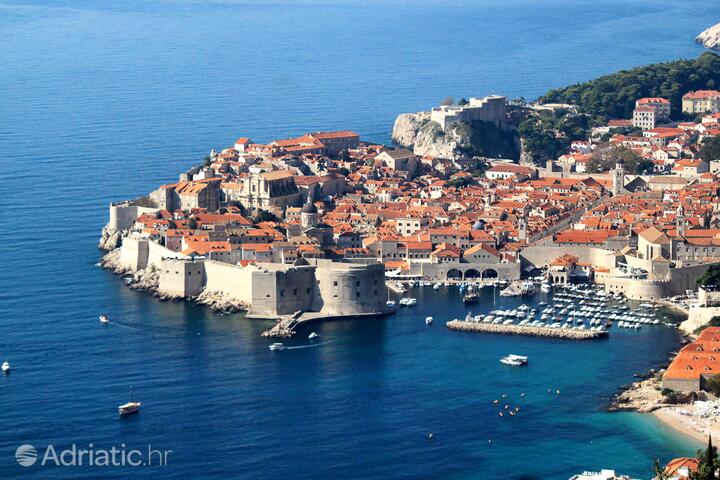 Croatia's most important tourist destination, Dubrovnik was once an unconquerable fortress town. Today it is everyone's favorite museum town. Historical fortresses and towers, parts of a mile-long rampart complex, bid an impressive welcome to the numerous visitors. Dubrovnik's thick walls hide a wealth of historical heritage, while its cultural facade is built up by theatrical, musical and film performances.

The richest treasury of Dubrovnik's architectural wealth is exhibited within the Old town, which is protected, in addition to its walls, by UNESCO. Unforgettable views of the urban core are afforded by walkways along the ramparts - as well as from the 413 meter-tall Srđ (pronounced "surge") hill, reachable by cable car.

Within the Old town, the Fountain of Onofrio greets Dubrovnik's visitors right on the main street, the Stradun. This architectural gem has been the meeting place of the younger generations of Dubrovnik for the last six centuries.

Further down Stradun street, other delightful edifices await - the Sponza palace and the Prince's court. Within the latter building (now a museum) visitors may see the immaculately preserved furniture from the halcyon days of the medieval past of Dubrovnik.

The trove of impressive relics will delight you within the Baroque walls of the cathedral, close to the gorgeous church of Saint Blaise, the patron saint of Dubrovnik. The city is also home to one of Europe's oldest pharmacies, which rarely fails to charm the Old town visitors, tucked away in a fourteenth-century Franciscan monastery.

A summer of culture on Dubrovnik's hidden stages

UNESCO has placed a double layer of protection on Dubrovnik. Aside from the old town core, the festival of Saint Blaise is also part of the world cultural heritage - the intangible kind. The Feast, as it is commonly called, is a delightful and long-lasting tradition, unbroken since the tenth century, with a wealth of custom attached to it.

Another landmark cultural event are the traditional Dubrovnik summer games. Scattered around the various Old town locations, numerous actors, dancers and musicians come to perform. The greatest attractions are the shows held atop Lovrijenac fortress (named after Saint Lawrence), above a 37 meters tall cliff.

The sounds of music echo inside Prince's court as well. Globally famous names come here each summer as part of the "Julian Rachlin and friends" chamber music festival.

Dubrovnik is, in addition to all this, a city of film. The Libertas Film Festival has for years now brought together movies from all over the world, which are all in some way connected with the theme of liberty. This powerful symbol of Dubrovnik (the Latin form of "liberty" being "libertas") has found its way to the city's official flag.

Dubrovnik - What to do, what to see?