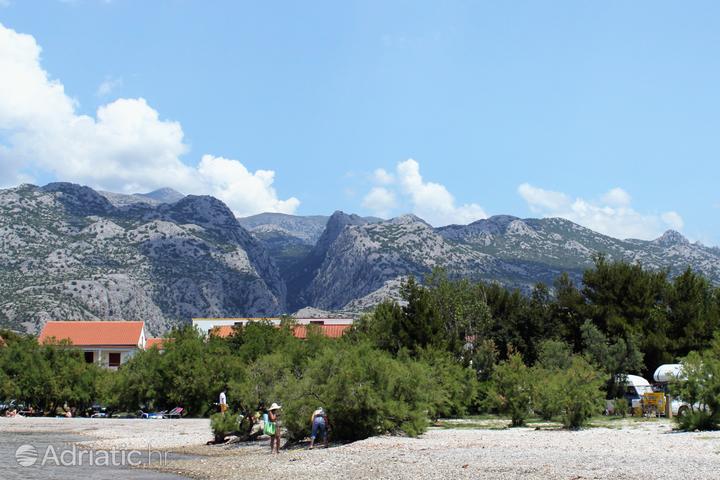 Riviera Paklenica is and ideal choice for vacation for lovers of both the mediterranean and mountain atmosphere. From our offer of private accommodation we recommend apartments and rooms with a sea view and accommodation with AC that is 200 meters away from the sea.

Paklenica is located near the Adriatic coast, on the southern foothills of Velebit mountain. Its attractive scenery, part of which forms a National park, has served as the open stage for the cult westerns about the Native American chief Winnetou. His footsteps can be traced on the demarcated pathways all along the Paklenica Riviera, or toured in a jeep safari.
The combination of seascapes and mountain landscapes is the origin of the charm of Paklenica Riviera. It is sure to challenge you to many adventures, as it has already done to so many; however, it will also give you a chance for rest and relaxation afterwards, on the shingly beaches or in the shade of black pines.

The ancient history of Paklenica Riviera

The ancient ambience of Paklenica lives on in the hamlet of Ljubotić, where you will be able to sample home-cooked specialties from the heart of Velebit.
The center of Paklenica Riviera, Starigrad, has been built on top of the ancient town of Argyruntum. Around the remains of Večka tower, a watch-tower built as defense from the Turks on the cape of Kuline beach, many legends are vowen. The most famous of these would have us believe the tower was once the royal court of (the equally legendary) king Pasoglav.

Along the main road, on the way to Seline town, the early medieval church of Saint Peter can be seen. It is one of the earliest testimonials to the local settlement of Croats. Further along the way on the Paklenica Riviera, the bridge of Maslenica leads the visitor to Novigrad. The picturesque town sits below a hill, atop which are the Roman ruins of Fortica castle.

The astonishing shapes gathered under the auspices of Paklenica National park are equally delightful above and below ground. The attractive canyons of Velika and Mala (Greater and Lesser) Paklenica, deeply incised in the rocks of Velebit, feature crystal-clear spring waters from numerous sources.
Subterranean caverns abound with stalactites. Especially famous for this landmark is the cave known as Manita peć (literally the Crazy furnace) where these shapes take on the most amazing forms, many of which have been named, such as "the helmet" or "the organ."
The visitor's imagination can likewise hardly fail to be fired up by the number and diversity of the area's plants, birds and butterflies.

Paklenica Riviera is best explored along its trekking trails. They have been demarcated and peppered with signposts which detail the area's natural, cultural and historical features. Along the way, unique stone-carved funeral monuments can be seen. Decorated with reliefs of mythological motifs, the local name for them is "mirila". These are only some of the reasons that make Paklenica one of the most famous trekking destinations in Europe.

If you get tired of walking, the meandering course of Zrmanja river can take you on a rafting adventure in the Paklenica Riviera. Medals for bravery should be given in Maslenica, to all those brave enough to try bungee jumping from its great bridge.

Paklenica - What to do, what to see?