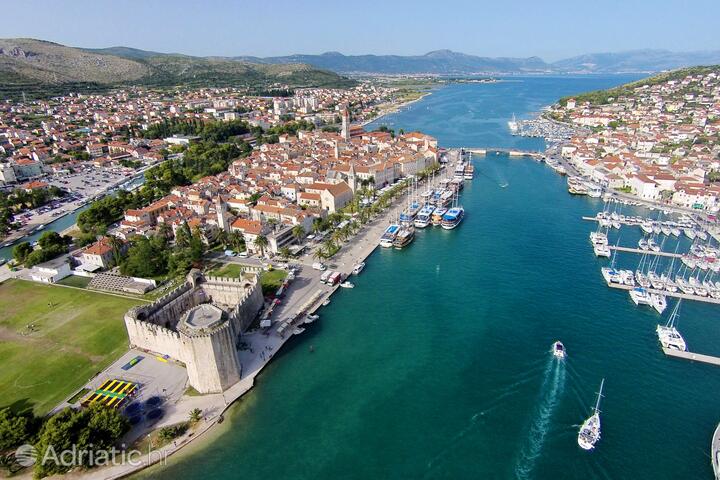 In the pearly necklace of maritime Croatia there stands out a rocky jewel by the name of Trogir. Greek, Venetian, Turkish and French aspirations for the posession of this ancient Illyrian settlement has resulted in the very best that history has to offer. Proud town walls loom over indestructible centennial gates, the Kamerlengo fortress, the tower of Saint Mark and the tall spires of old churches.
Forty centuries have left the Romanesque-Gothic Trogir ornamented with diverse artistic styles. UNESCO could not help but protect this monument-town with its globally significant cultural heritage.

Trogir - a treasury of historical wealth

On the central town square, in the vicinity of temporal buildings, Trogir presents its centerpiece - the wooden portal of the Cathedral of Saint Lawrence, made by Master Radovan over seven hundred years ago. The indented gates portraying Adam and Eve astride two lions are surrounded with vines, Zodiac signs, scenes of everyday life and scriptural tales. This supreme example of Gothic humanism hides the perfect blend of Renaissance and Gothic art and architecture inside the church, and another in its repository of sacral wealth.

Among the diverse buildings which surround the Cathedral, some of the more delightful details include the triple windows on the Ćipiko palace facade and its cloister. Careful observers will be rewarded with antique stonework ornamentation on the medieval columns of the city loggia, as well as the lifelike reliefs underneath Latin jurist inscriptions. The picturesque clock tower cannot but stir the desire for the friendship with the Prince's palace inside this living monument to stonemasonry to last as long as possible.

Trogir in the mosaic of eternal moments

Having found the marble relief of the mythological deity Kairos, Trogir has "held onto a tuft of his hair" and, according to legend, caught a moment of happiness. This relic of the fourth century BC can be seen in the Monastery of Saint Nicholas. It has for long inspired musicians, dancers, painters and street performers who take part in the Moment of Happiness Festival, when the streets of stone ring out with creative zeal.
Classical, entertaining and traditional sounds of the Trogir summer of culture will bring you into symbiosis with Dalmatia's finest stage - the Venetian fortress Kamerlengo. Pay a visit to the town between islands and mainland and enjoy the melodies of carefree summer nights.

Search - Trogir
Live Chat Can we help you?