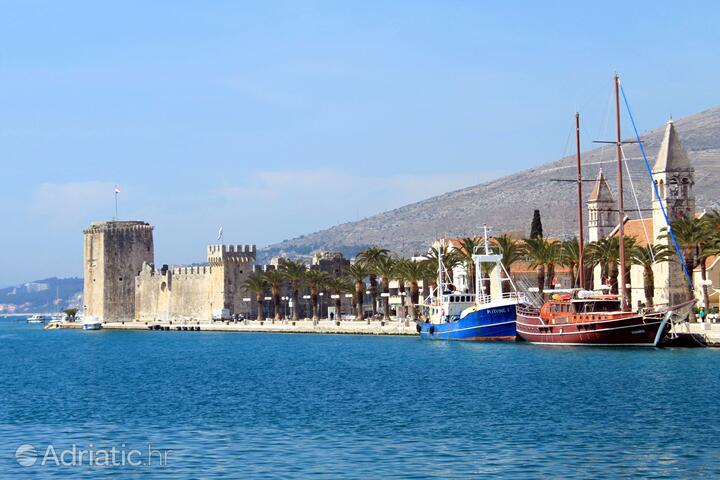 Riviera Trogir, as one of the top destinations in the Adriatic Sea, is a unique story of the Dalmatian coast. The narrow streets and so called 'Kale', where you can get lost while exploring new sights and scenes for your photos and memories, are located in the center of this town and they keep many secrets. A number of legends that have yet to be discovered await you. Book your accommodation in Trogir, or in some neighboring city to experience the magic of Trogir Riviera. You will find more than 300 apartments and rooms in the offer of private accommodation, as well as villas and holiday houses. Čiovo is conveniently at hand and you can also find cheap apartments from our wide variety of accommodation.

As your walk takes you along the Trogir Riviera, a succession of coastal towns springs up, the promises of an idyllic holiday. Soon, tou get to see the jewel of UNESCO's world heritage list – the Old Town of Trogir.
Aside from those who are looking for a place to spend family vacations, the Trogir Riviera, with its four marinas, is a major site for yachters, who will take pleasure in exploring the surrounding archipelago.

Trogir – when a city becomes a synonym for a museum

Trogir was founded by Greek settlers 3000 years ago. It is one of the best-preserved Romanesque-Gothic towns in central Europe, and this fact brought it onto the UNESCO world heritage list. It would indeed be very hard to list all the artistic values Trogir hides in its narrow stone streets. At least of them is impossible to miss – the Cathedral's monumental portal, the most important piece of stonework in Dalmatia.

Trogir is often called a museum town. The reason for this will become apparent after you have seen the fortresses of Kamerlengo and Saint Mark, the Cipiko Palace, the Cathedral of Saint Lawrence and its treasury. Its highlight is a relief of the Greek god Kairos, which is as ancient as the third century B.C.

Traces of the past along the Trogir Riviera

The Old Town of Trogir is certainly the Trogir Riviera's cultural pearl, but Marina boasts of its own Renaissance Bishop's palace – which has been refurbished into an elegant hotel. Seget Donji and Vinišće likewise offer glimpses into the Riviera's past – Illyrian hill forts, Roman ruins, medieval churches. The Trogir Riviera hinterland is of interest not only as a hike through nature, but also as an opportunity to see fortifications from the Turkish wars, old churches, standing stones...

The last swamp and the Trogir Riviera's millennial olive tree

The Trogir Riviera contains one of the last surviving marshlands on the east coast of the Adriatic. The Pantan natural reserve once encompassed a much larger area, but is still today the home to a large number of birds, and an increasingly popular tourist destination, whose main attraction is its Renaissance millhouse.
Lovers of botany will be delighted by a protected natural monument in Kaštel Štafilić – a 1500 year-old olive tree – as well as the numerous homegrown and exotic specimens of the town school's botanical garden.

Idyllic spots on the Trogir Riviera

Seget Vranjica, Sevid, Uvala Ljubljeva, Vinišće, Marina, Seget Donji are small towns on the Trogir Riviera, each with seemingly little to offer. However, if we take into consideration that the visitor will be lulled into absolute tranquility, seduced by the gorgeous beaches with crystal-clear water and by the specialties brought to the local eateries straight from the sea, we might as well say these towns on the Trogir Riviera have all it takes for an ideal vacation.