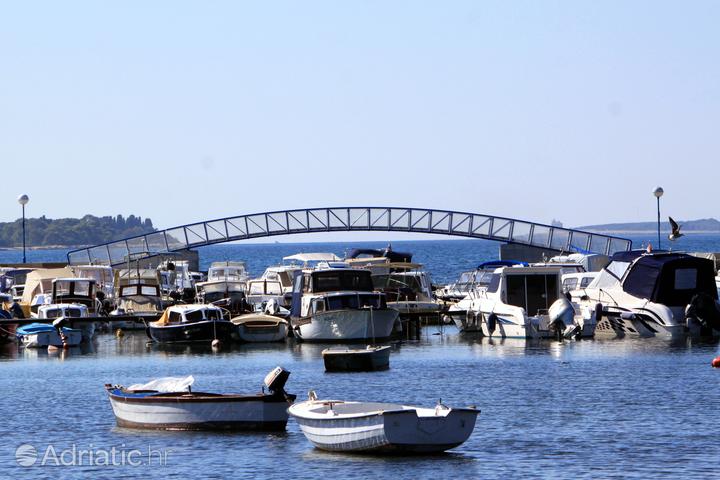 The southwest of the Istrian peninsula has for thousands of years boasted of the picturesque towns of the Fažana Riviera. The Roman villa in Valbandon, the narrow streets of Peroj, and the avenues and squares of Fažana become, in the summer months, a stage for fishermen's feasts, folklore and fashion shows featuring jewelry worn by ancient Romans.
Croatia recognized this pearl of the Adriatic coast together with the rest of the world in 1983, when Brijuni were declared a National park.

The Fažana channel was the site of many battles by the various nations which have left a part of their culture to the towns along the Fažana Riviera. Here one can find archeological sites predating even the Romans. The medieval charm of the churches of Saint Stephen and Saint Spyridon is undeniable, while the main attraction of the town of Peroj is a hackberry tree (locally known as ladonja, the tree of big shade), which has decorated the town square for centuries. Every July, visitors to Valbandon can enjoy the reenactment of the Fažana Riviera's Roman past, taste the food eaten in that period, and explore their creative side in the workshops of Roman mosaics, amphoras, or even try their hand at a culinary contest where food is made in a "čripnja" - a round dish meant for open-air cooking.

Fažana is the starting point for excursions to the Brijuni archipelago, a national park filled with exotic vegetation, the habitat of endemic kine, sheep, donkeys, goats as well as numerous imported species, which can be seen running free on the glades of Brijuni.

Fažana introduces you to the sardine, "small feeder, teacher of modesty"

Silver, green and blue - the colors of a sardine's scales - have become the trademark of Fažana town. The long fishing tradition of this town has resulted in a Fishing academy, where all those enrolled learn to salt this staple of Adriatic cuisine. The Sardine park along the Fažana promenade brings together diverse artistic creations, and hosts numerous fish-themed public festivals.

At the Sardine trail, visitors have a chance to try and learn how to prepare the eponymous fish in various diverse ways. The Istrian malvasia, made of an autochtonous variety of grape, can be sampled in the wine cellars of the Fažana Riviera. All along the Olive oil trail, you can enjoy the "divine elixir" which the Roman emperors considered the measure of perfection.

Visitors to the Fažana Riviera, aside from the gorgeous beaches, have access to numerous biking trails, golf courses, a windsurfing school; the Brijuni national park is within hand's reach, and also in the neighborhood is Pula with its unmissable amphitheater, the Arena.