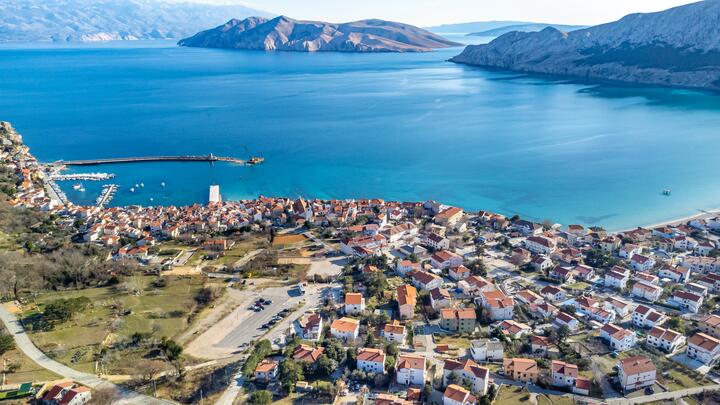 The romantic town of Baška has placed its stone houses in a green valley on the island of Krk. The Adriatic blue here brings smiles on the faces of delighted visitors. The ancient history which has carved its secrets into the island's rock is only an overture of the ethnological opulence hidden in this curious town.

Baška in the valley of Croatian literacy

A small spring of Croatian history, the town of Baška in its green valley has held onto, since the year 1100, the oldest written monument in Croatian language - the Slab of Baška. Visitors can see a replica in the small church of Saint Lucia, in the nearby town of Jurandvor, where the celebrated slab was found.

The old Slavonic writing system known as the glagolitic script, hugely important for this region's history, is commemorated in the shape of thirty-five stone sculptures arranged along a footpath called the Baška Glagolitic trail.

Interesting historical finds are hidden also in the chapel of Saint Mark, where mosaics from antiquity have been found. The Baroque church of the Holy Trinity is a veritable treasure trove of the paintings of seventeenth-century masters. Baška continues to surprise with the oldest church bell on Krk island, which has sent forth its peals from beside the church Saint John the Baptist since the fifteenth century.

he surroundings of Baška will be intrigued by the mrgari, odd stone edifices once used by shepherds to sort their flocks out. The shapes, reminiscent of stone flowers, are a great decoration of their part of the island.

The charming Baška boasts of its pasts in the Heritage museum, which holds traditional folk costumes and an interesting ethnological collection of Krk island. The attractive Ethno house is an ongoing reenactment of bygone days, including authentic furnishings.

The Krk folklore review continues in Baška on the many events devoted to folk customes, when colorful costumes fill the city summer stages.

Fishermen's day, a traditional feast with strange competitions, has been a part of the green valley since the year 1910.