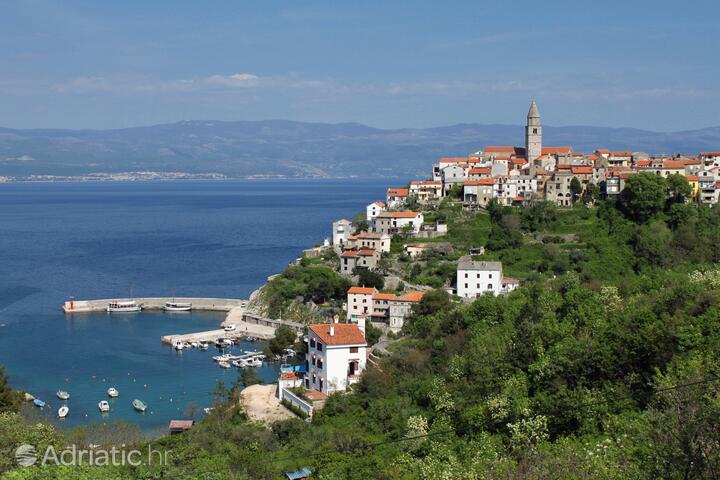 Thanks to its fabled citadel, all of Vrbnik has been declared a protected cultural monument. The mystical ambience of its twisting alleys takes one past old houses with incredible legends behind them to the historical remains of medieval defensive walls. Along with the wealth of written monuments treasured in its unique library, Vrbnik impresses also with the golden wine of Krk island, and champagne from the sea bottom.

The town of Vrbnik is an unusual labyrinth of winding alleys and jostling houses, built atop a 150-foot cliff rising proudly out of the sea in this part of the island of Krk. The outstanding sight amidst the old town's tight passages is the Renaissance bell tower doubling as an art museum, beside the church of Saint Mary.

Another intriguing landmark of Vrbnik is the Vitezić family library, whose opulent collection is ornamented by Johan Koehler's Atlas from the year 1718 - one of only two surviving copies of this seminal work. The past of Vrbnik has left a large number of Glagolitic manuscripts - valuable reminders of the beginnings of Croatian literacy. In the ninth century, this area was particularly known for Glagolitic writing. A source of great pride to all in Vrbnik is Croatia's first printing press, whose statue adorns the park beside the church, while the machine itself can be seen in the library.

Vrbnik tangled in the net of marine champagneVrbnik's street plan is strangely reminiscent of a cluster of grapes. This is an excellent fit with the golden fields which surround the town, whose fruits can be sampled during the Wine days of Krk island. The seductive flavor of the autochtonous white wine Žlahtina, whose name is now known far and wide, is only a small part of Vrbnik's invitation to good times.

A city surrounded by the blue expanse and a network of vineyards weaves its finest fruits amidst the gentle waves of the sea's depths. The most irresistable of Vrbnik's vintages is the Valomet sparkly wine, bottles of which are matured some thirty meters below the surface of the sea.