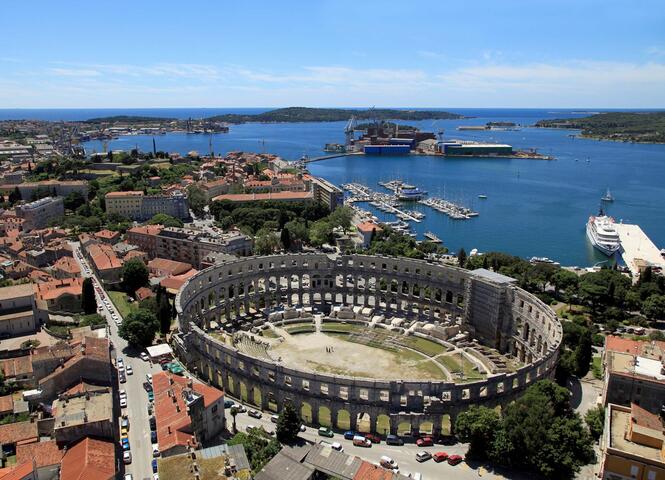 Mythical Pula is a city of exiles from Colchis, who had come here in an unsuccessful attempt to recover the fabled Golden Fleece. This link to the story of the Argonauts, cherished in Pula, is far from being the only witness of the city's long history. The remains of early humans discovered in Šandalja cave are the oldest ever found in Europe.
The fifth-century BC fort built by the Histrii is now reduced to ruins atop Kaštel hill, however with the advent of the Roman Empire, a new golden age of Pula began. Venetians and Austrians succeeded the Romans as Pula's overlords, and each of these have left a unique imprint on the architecture of Istria's biggest city.

Pula on the historical stage of its seven hills

Pula is situated on the shores of its eponymous bay, built atop seven hills as a parallel to ancient Rome. Roman Pula is best known for the amphitheater known simply as the Arena, built in the first century. During the Pula Superiorvm antiquity festival, it brings the remote past to vivid life. From the city walls, the even older Herculean gates await, together with the richly decorated Sergia family triumphal arch, and the Double gates.
The main city square, the Forum, hosts the imposing statues of stone and bronze inside the almost fully preserved Temple of Augustus. The tenth-century City hall was build atop Roman ruins, and in the continuing centuries continued to combine the most attractive elements of various architectural styles.
A seventeenth-century Venetian baroque fortress now crowns Kaštel hill. Hidden within is the extraordinary cultural heritage of the Istrian history museum.

Pula - a delicacy to everyone's taste

Passionate cyclists are likely to come to Pula via the "Amber road" - the cycling route EuroVelo 9 - while movie lovers will be delighted by the starlit screenings in the Arena. The Pula Film Festival features the cream of the Croatian and international crop, which regularly earns it such epithets as "the best" and "the most spectacular."
From the period when Pula was the main port of Austria-Hungary we today have the Navy church and the graveyard. The latter has been redecorated into a gorgeous park. You can continue your stroll from there onto Valkana cove and see for yourself why this is the locals' favorite walkway. An supreme destination for those seeking hidden treasure, the stony beaches of Pula were once trodden on by dinosaurs. The world's largest amphora repository is likewise found here. Under the sea lie the countless wrecks of sunken ships, each with its own tragic tale.

Search - Pula
Live Chat Can we help you?