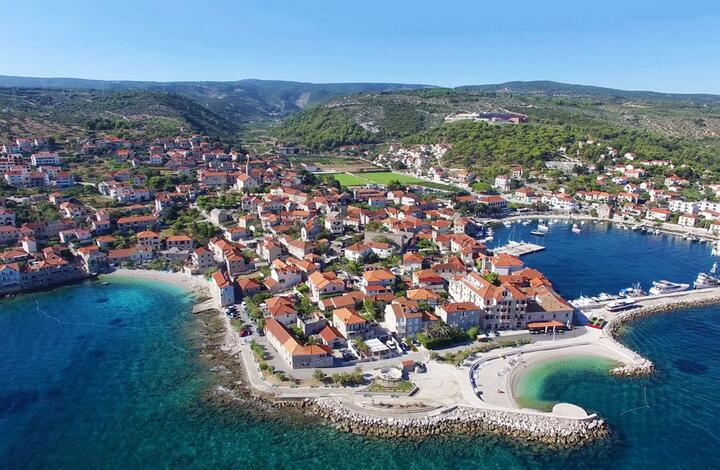 Postira is situated in a sheltered cove, amidst fertile vineyards and olive groves. One of the most popular beaches on Brač island, Lovrečina, is found here, in a by typical Mediterranean landscape. Postira is also well known for its historical remains, and as a place which all visitors leave well-satisfied.

Postira has developed as a town since the sixteenth century, when some of the inhabitants of Dol, a Brač settlement away from the coasts, came down to the waters after the danger of pirates had receded.

Tumultous years from the distant past are attested by the architecture of Postira, always built with an eye to potential defensive positions. So we find murder holes even in the apse of the parish church, and of particular note is the fortified complex of House Lozanić.

Cultural tourism is very important in Postira. In the surrounding area, there are as many as three different sets of remains, from three different historical periods. Lovrečina is of greatest importance, not only for the remains, but also for being one of the island's main beaches. A visit to it can include sight-seeing in an early Christian basilica, sarcophagi and an ancient harbor site, in addition to fun on the sand.

Postira in poetry and on the waves

The calendar of public events fails to lag behind the cultural and historical wealth. Nazor days are an event at the end of May dedicated to scholarly appreciation of the great poet of Postira - Vladimir Nazor.

Our Lady of Mount Carmel on July 16 is a public feast not to be missed, and another such event is the Regatta of Postira.

Postira, Brač - What to do, what to see?