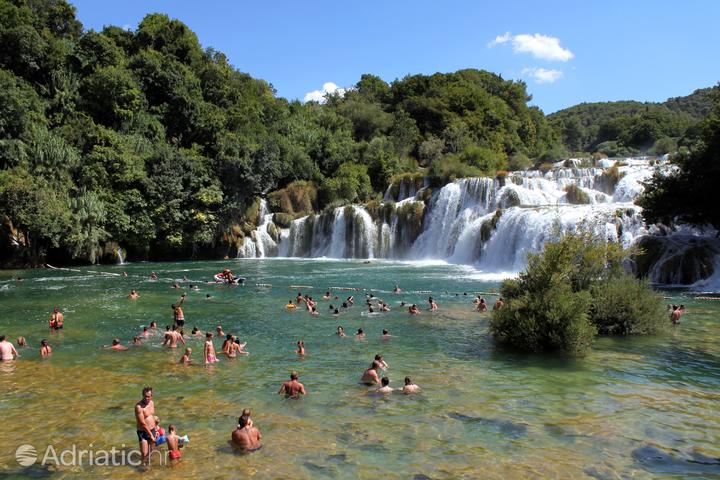 In an escape from Dinara mountian, the river Krka bored away at her limestone bed, chiseled away at her staircarse on a fifty-mile run to the sea, and patiently built up its status as a national park.

The aquatic stairway interspersed with lakes was a readymade choice for the hermitical life of the monks who have refreshed their spirit and theor body on this natural wonder of Krka river - an island in a lake. Diverse yet unchanged, both wooded and rocky, Krka river is Europe's most valuable bird sanctuary and the home of many endemic species. It is also a common picnic destination for visitors to Croatia.

Open to visitors all year long, Krka national park will welcome you to its seven travertine barriers. This wealth of brackish water ends at the majestic last fall, Skradinski buk, which is commonly described by using superlatives, such as the most beautiful, the tallest, the most visited... discover the truth of these reports for yourself.

An information path leads around Skradinski buk. Every step of the way reveals new extraordinary facts about the Krka national park: endemic fish, otters, old watermills imbued with folklore wealth, the 211 bird species in an endless mosaic of floral life... Stop for a while on one of the small bridges which leaad around the seventeen stairs of Skradinski buk and enjoy the deafening duet the river and its travertine barriers.

The cavernous underground of Krka national park are unfortunately unavailable for visit. They house an endangered community of bats and the tiny endemic underground vertebrate known as the elm. The remains of Roman and even neolithic cultures can be found here and there.

Your impressions of Skradinski buk can settle in a relaxing boat ride on the elongated Lake of Visovac. Walled in by the final fall's barriers and the grey canyon of Krka, it extends to the sequence of cascades known as the "pendants" of Rog fall (Roški slap in Croatian). In the midst of the lake there is a jewel of an island, carved by human hands. A monastery, a small park and a church, built by the Franciscans in the fifteenth century, looks as though it was there since time began. In the church's quiet interior, there is a rich library with some of the world's first printed books and historical church vestments. This sacral complex has an unforgettable vista on its island amidst cypresses, willows and poplars. It will not fail to impress you as a supreme experience of nature enriched with architecture.

If you wish to extend your stay in Krka national park, the small towns of Zaton and Raslina will welcome you in the river's lower course and offer the gastronomic delights found in brackish waters.

Search - National Park Krka
Live Chat Can we help you?