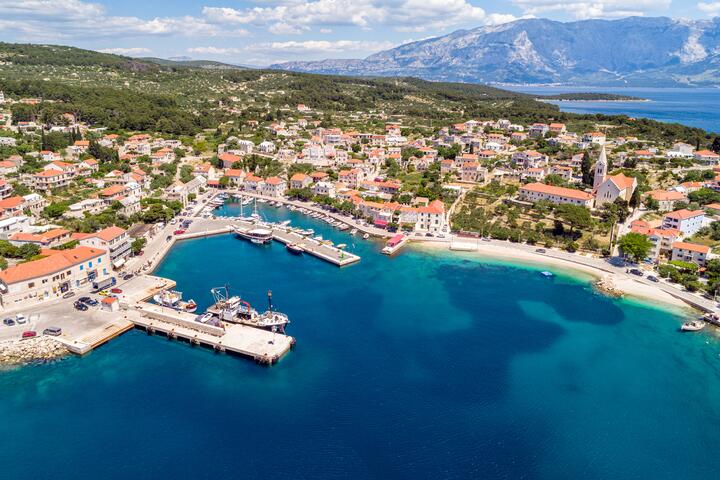 Sumartin is a small town situated in the easternmost part of Brač island. Even in the peak period of the summer season it remains a scene of quiet idyll. This makes Sumartin the perfect place to enjoy exploration of sheltered coves, while at the same time Bol, the hub of Brač nightlife, remains only twenty minutes' driving away.

Sumartin is the youngest settlement on Brač. It was established during the seventeenth century by refugees from the Makarska riviera, which was then ravaged by Turkish invaders. They brought a slice of their culture with them, which can today be seen in folk costumes, different customs and speech, all of which set Sumartin apart from the other towns on Brač.

The life of Sumartin was marked by ships. Of all the island's towns, the number of ships and boats per capita is the highest in this town. Lučica harbor is well worth a visit, as one of the last surviving shipyards where wooden boats are made and repaired on the Adriatic. The entire process is manual and in keeping with tradition.

Sumartin preserved in a monastery

Although no more than a village, Sumartin houses very valuable heritage and the memory of one of the greatest pillars of Croatian culture. The Franciscan monastery and its archive reveal the paintings by Venetian masters, experted crafted filigree, a wealth of books and ancient scrolls, and various documents such as monastic annals.

The stand-out historical personality of Sumartin is a former monastic director, Andrija Kačić Miošić. He was instrumental with the construction of the monastery during the eighteenth century, and was also a literary figure of some renown. In his lifetime, his collection of folk tales was a noted best-seller.

Sumartin, Brač - What to do, what to see?