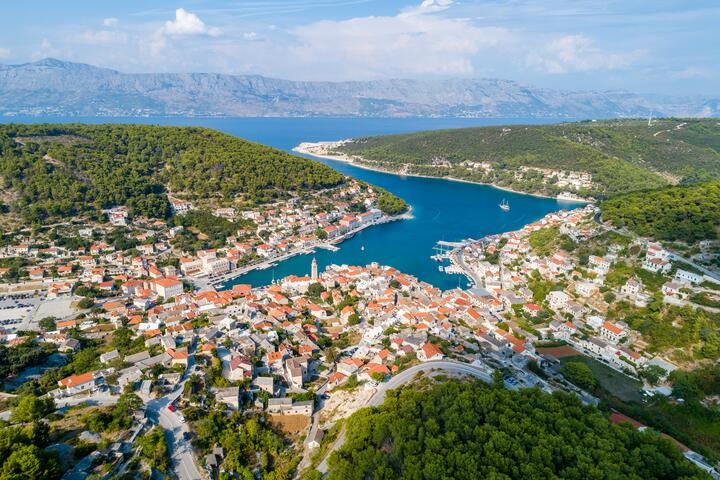 Pučišća is the second town in size on Brač island. Its houses, sprung up on the hills above a deep-lying marine channel, make for a very interesting panorama. As Pučišća is at the bottom of a deep cove, a long walkway with innumerable swimmer's oases surrounds it on two sides.

Pušišća - a harbor of fortresses

This nickname of Pučišća is a debt to its tumultous past. During the Middle Ages, the coastal strip was not the safest place to be on an island, so any settlements in this area included defensive towers as part of their setup. Pučišća once had as many as fifteen such towers, their most interesting surviving representatives are the fortresses of Ciprijan Žuvetić, Akvila and the Dešković family.

Alongside the Renaissance castle Žuvetić and the Moro palace, the sacral wealth of Pučišće should not be missed. It can be seen in the tiny church of Saint George, in the shape of a sculpture of the titular saint fighting a dragon, while a little down the road is the church of Saint Dominus whose richly painted walls make it a real Baroque pearl.

Stone and its carving are a recognizable symbol of the traditional lifestyle of the island of Brač. In this respect, Pučišća is a most notable town. There are as many as three quarries in its vicinity, part of numerous buildings and sculptures. One such is rumored to be the White House in Washington DC. An ancient tradition of stonecarving is continued today by a school where this craft is taught. It is only one of three such schools in Europe, and is notable for the traditional tools and techniques being used and taught, unchanged since the Renaissance period.

The Cultural summer of Pučišća, the Brač summer festival and the International summer music school concerts are only a small sample of the cultural events which keep visitors entertained throughout the summer in Pučišća.

Lovers of an active holiday will enjoy a badminton tournament at the end of July, while the area surrounding the town is suitable for cycling, wind surfing, paragliding, diving and more.

Pučišća, Brač - What to do, what to see?

Search - Pučišća
Live Chat Can we help you?