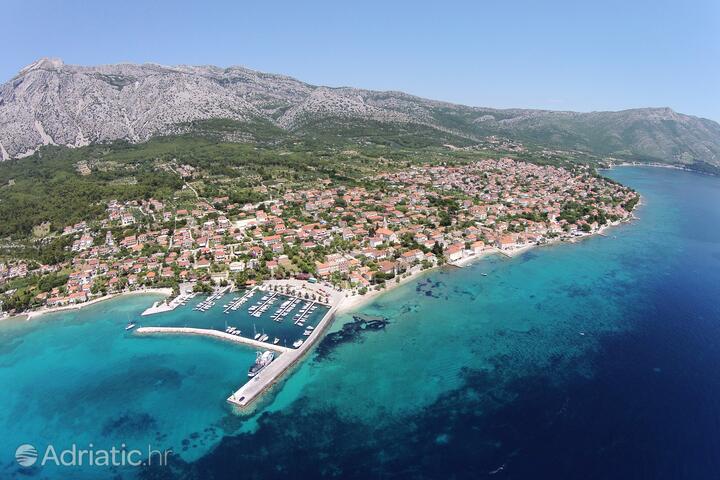 On the southern slopes of Pelješac, there lies the town of Orebić. The principal town of Croatia's second peninsula was for centuries known for its fearless sea captains and sailors, whereas these attributes are nowadays given to windsurfers.
From the embrace of grey, mountainous rocks, Orebić oversees the shipping along the Pelješac channel and proudly presents its cultural heritage to curious visitors, beckoning with a glass of award-winning wines.

The captain of the Pelješac channel

The family name Orebić became the town's name during the sixteenth century, when the eponymous family moved here and began making its indelible mark on local history. Sailors hailing from this town made an important contribution to the navy of the Republic of Dubrovnik, while the preserved chapters from its past can be read at the Naval museum, which houses such exhibits as the paintings of sailboats, tools and books used during navigation.
The contemporary Orebić is best explored on foot, strolling along its streets. Great attention-grabbers will spring up in the shape of the gardens of old captains' homes, numerous small churches and the seven Neo-renaissance fountains.
The surroundings of this Adriatic town are enriched by the lush vegetation of cypress and Aleppo pine in their forested nature preserve. The Franciscan monastery on the shoulders of the hill named for Saint Elijah stands out amidst the conifers. Dare yourself to a two-hour climb to the top of the hill and reap the reward of a gorgeous view of Orebić, the coastline around it, and the islands of Korčula and Lastovo arising from the waters.

Orebić - another word for a holiday

The waters around Orebić are perpetually ruffled by the mistral, making the perfect waves for windsurfing. Art lovers cannot fail to appreciate the Franciscan monastery on the small island Badija. Other surroundings are likewise rewarding targets for exploration - a day trip is the perfect way to acquaint one's self with Mljet National park or a number of other destinations in close proxymity to Poreč.
If you prefer to simply bask in the sun, an Orebić beach holiday can be spiced up with a glass of Dingač, the famed local wine variety.

Orebić, Pelješac - What to do, what to see?

Search - Orebić
Live Chat Can we help you?