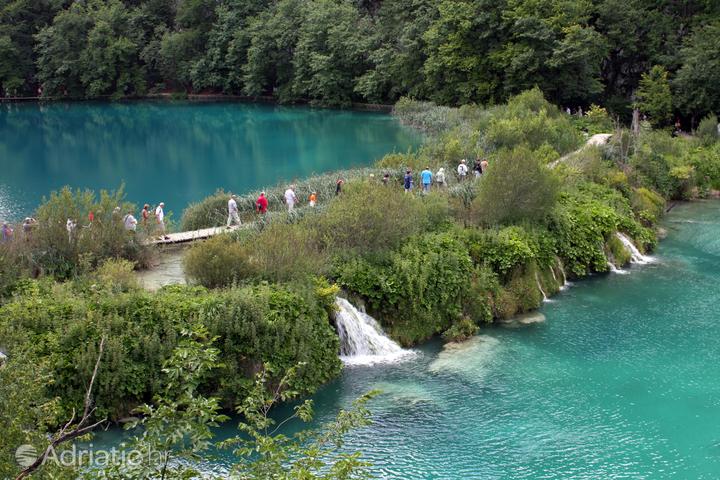 In the heart of Croatia lies the Plitvice Lakes National Park. This land of descending lakes has been captivating people's imaginations for centuries, and in 1949 it was finally decided this corner of the universe must be protected for the coming generations. It was then that Plitvice became Croatia's first national park. They have been included on the UNESCO list of world heritage sites since 1979.

The park stretches to an area of 73 thousand acres, covered with sixteen lakes divided by travertine barriers, magnificent forests, waterfalls, caves and springs. Their timeless beauty has made Plitvice National park an unmissable port of call for visitors to Croatia.

The natural fairy-tale of Plitvice lakes

The Plitvice Lakes National park narrate their fairy-tale of nature in four chapters - through the four seasons. Spring and summer weave a floral tapestry on its meadows, the rivers swell with snowmelt, and the waterfalls construct romantic aquatic curtains below which the enchanted walkers pass as though under rainbows. Autumn brings a wealth of warm colors mirrored in the numerous bodies of water of the Plitvice Lakes National park. The winter mood is set by the snow-bedecked tree-crowns and frozen cataracts and lakes, reminiscent of an ice fantasy where time has stopped.

Ancient tracks wind their way around and across the lakes which change color, from emerald to deep azure to silver, depending on the number of its "inhabitants" and the interplay of rays of sunlight and the water's surface. The pathways take you under or above ninety-two falls, the highest of which, the Veliki slap or Grand fall, rises to 78 meters, or 340 feet. A counterbalance to the aquatic empire is provided by the green oasis of Čorkova uvala, the most beautiful primeval forest in the Dinaric Alps.

This magical landscape can be enjoyed through a panoramic train or boat ride, visiting the shooting sites of western films featuring the Indian chief Winnetou.

Go back to your roots in the Plitvice National Park

The villages of Rastovača, Poljanak, Jezerce and Plitvica, which frame the National Park, you can enjoy the beautiful scenery, home-cooked food and traditional architecture. Each of these offers a separate pathway into the past.

The village of Korana contains a water-powered sawmill dating back to the early years of the twentieth century. Smoljanac is near the ancient remains of Drežnik, a defensive stronghold of old Croatian aristocracy. An hour's drive from the Plitvice Lakes National park lies the village of Smiljan, the birthplace of Nikola Tesla, where a Memorial center is dedicated to the great man of science.