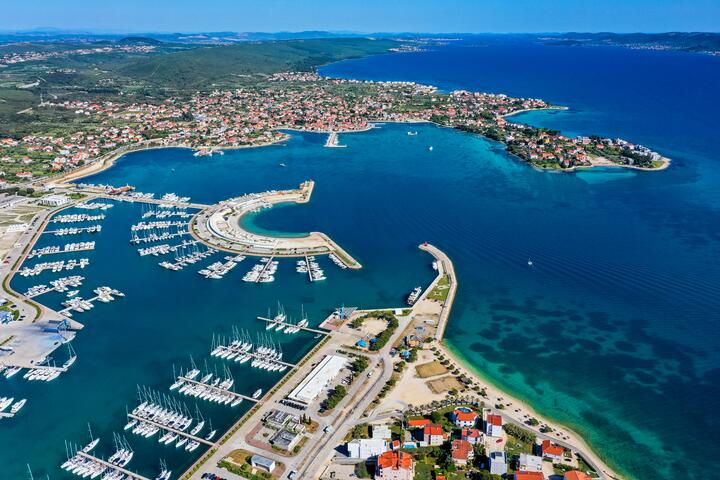 Secrets of Roman past shrouded in green and kissed by the cove's deep blue, are all together an irresistable postcard which Sukošan sends out to all its visitors. Ancient legends told on heavenly beaches, amidst joyous feasting, make up the irresistable attraction of this charming Mediterranean town.

Mystical Sukošan in the stones of the past

The stone walls which criscrossed the Zadar riviera's green fields in Roman times descend all the way to Sukošan's pleasant cove.

Once girt with defensive walls, the tumultuous past of Sukošan is now attested by such remains as the fifteenth-century Upper Gates. The small church of Our Lady of the Graces abuts the gates, and its odd interior will evoke the defensive purpose it once served.

A charming feature of Sukošan is the church of Saint Cassian, next to its stately bell tower, in which many half-legendary mementos of the patron saint are held. The bishops' summer home, known as the Palac, dates back to the fifteenth century. Its remains are perched dreamily on their islet amidst the idyllic cove.

The Mediterranean town of Sukošan reveals its glories in one of Croatia's largest marinas. The blue of its cove is bedecked each summer by the sails of many boats whose owners flock to this striking marina.

In addition to its reputation of a sailor's paradise, Sukošan is known also for its wonderful beaches, where sandy shallows will delight children. The ancient name of one of the beaches is in fact Dječji raj or Children's heaven - a name given by the visitors and embraced by the locals.

The fun goes on into the summer evenings, filled with many fiestas, traditional copetitions such as donkey racing, and the sound of folk choirs ringing in the narrow streets.

Sukošan, Zadar - What to do, what to see?