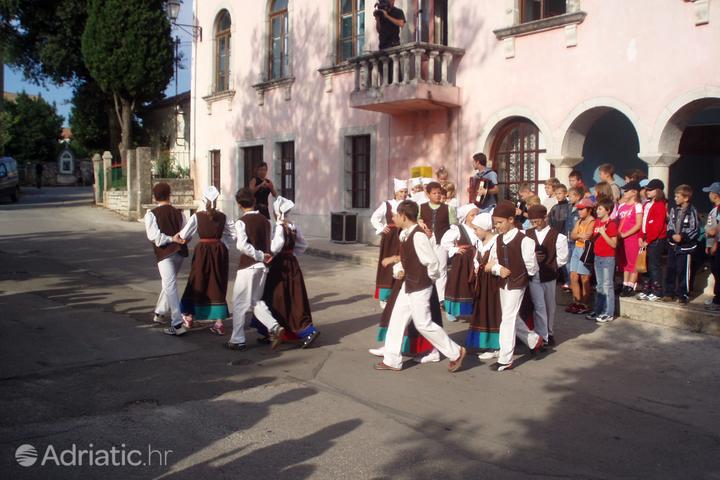 With its prehistory remains, medieval churches, baroque ornaments and authentic Istrian architecture, Marčana Riviera has established itself as a perfect place for a peaceful family vacation in the countryside. Serenity and peace of Riviera's surroundings originate from its rich nature – green hills and blue coves, in some cases due to steep and inaccessible terrain most easily reachable by barca.

Marčana Riviera and its spirit of historical diversity

Marčana, the center of Riviera, is dominated by a three-nave church of St. Pater and Paul from the 15th century and the medieval church of Antun Padovanski. Village Rakalj, first mentioned in historical sources in the 12th century, introduces its visitors with traditional Istrian pottery and ethnographic collection of old Istrian artifacts. Remains of the fortress, tower, defensive wall and sentry box are a great attraction of the Rakalj castle ruins. Marčana Riviera is also visited by pilgrims who come to Hreljići, the smallest Marian shrine in Croatia, to worship Our Lady of Good Health.

The oldest town in Marčana Riviera is Nezakcij. This metropolis of Histri (prehistoric tribe after whom Istria was named) keeps perfectly preserved ground plans that give you a detailed idea of prehistoric architecture. In Pula Archeological Museum you can check out urns and artifacts that were by custom placed in graves during the period preceding Roman conquest. Gradina, from the bronze age, will astonish you with historical, antique and late antique remains. Numerous Istrian kažuni are yet another interesting aspect of this region. These authentic small cottages, made without any binding material using a method similar to dry-stone walling, were used by the Istrian people as a bad weather shelter and a tool shed. If you follow Istrian wine and olive trails you're sure to see them dotted along the fields.

Idyllic village Kavran offers a splendid view of Kvarner bay, from the mountain range Učka in the north to Kamenjak cape in the south. Village Manjadvorci will delight you with its authentic Istrian atmosphere, where as in Prodol you can enjoy long walks in fields and oak-tree forests. The nearby quarry might also surprise you with its beauty – besides material, many artists found there inspiration for there work as well.

You might also want to check Horse centar situated in close vicinity to Marčana. For your enjoyment there's also a 300 meters long beach and numerous sport fields in Duga Uvala, village becoming more and more famous for its growing health tourism. You can also explore the underground of Marčana Riviera in Ljubić cave, inhabited as early as 2,000 BC, as well as Golubinka pit and Perešin's cave.

Both land and sea pleasures in idyllic Istrian villages

Due to its former restricted access status, Budava bay has preserved all of its natural beauties. Port of Krnica, coastal extension of village Krnica, is deeply nested into the mainland. Interesting coast and underwater of Krnica are ideal for diving, making it a great starting point for scuba diving tours in the surrounding area. Moreover, it's believed Krnica offers the best prepared shrimp in the Adriatic. Once there, be sure to try a sip or two of Istrian soup – warmed up red wine with some sugar, olive oil, pepper and toasted bread, usually served in bukaleta, traditional Istrian earthenware wine jug.