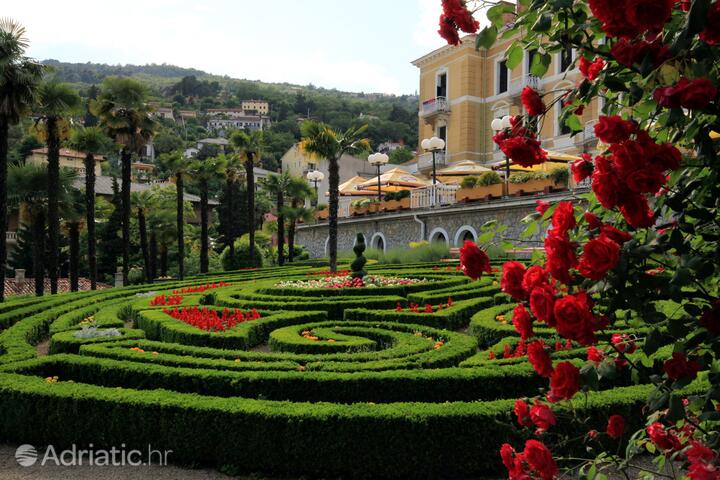 A great choice of accommodation can be found in our extensive offer for Opatija Riviera, located in the magical Kvarner. Book now and be one step closer to the perfect vacation. Opatija, as one of the top destinations in the Croatian tourism has been offering a variety of tourist attractions for decades now. In addition to attractions, investments in private accommodation are becoming more intense each year, which will benefit to all its visitors. About 300 apartments and private rooms make up the largest part of the total offer of accommodation in Opatija Riviera. Come to Opatija and enjoy the romantic scenery with beautiful walking paths along the Adriatic coast.


A tourist tradition spanning 167 years connects the chain of pearls along the Opatija Riviera - from Volosko to Lovran - with the ten-mile Lungomare walkway. Opatija's most famous resident - the Girl with seagull statue, invites you from the town's towering cliffs to spend an unforgettable summer on this fabulous riviera, which has turned the once fishing towns into famous travel destinations.

A romantic walk through the history of the Opatija Riviera

The Opatija Riviera is the birthplace of Croatian tourism. As early as the year 1844, the year in which the first holiday home was built, the Villa Angiolina, while the Kvarner hotel - Croatia's first - opened its doors in 1884. If you look down from the impressive Viennese-style architecture, Opatija boasts the marble stars bearing the names of Croatian celebrities.
A walk further down the Opatija Riviera, down the romantic Lungomare walkway, takes you to Ičići, the site of the gorgeous Villa Munz. According to a legendary love story, Jakob Munz had his dream-villa built for his wife Emma. The historical details of the Opatija Riviera continue on a 157 meter tall cliff (over 450 ft.), where the medieval Brseč town holds a seventeenth-century olive press, called the toš. In this building, the "old fashioned" olive crushing apparatus can be seen.

Greek legends on the coast of the floral Opatija Riviera

Opatija has embellished its main park, a true monument to gardening, with as many as 150 plant species collected all over the world. Among them, the Japanese camellia has become a symbol of the town.
The legend about the names continues to circle along the riviera to the town of Medveja, supposedly named after the Greek sorceress Medea, who was the first to bathe on its gorgeous beach. Kvarner's most beautiful beach - Sipar beach - hides itself in the Mošćenička Draga, whose clear sea is the ideal habitat for the famous Draga shrimp, an Opatija Riviera specialty.

The streets of art along the Opatija Riviera

The "summer Opatija", during the musical and dramatic nights of the Kaisernacht becomes a stage for the Imperial Austrian period, which has left numerous mementos on the town's architecture. Liburnia - Croatia's biggest jazz festival - winds its way through the streets of Opatija as well. The festival is held on open-air stages, in parks and even on the decks of boats.
Classical and folk music infuse a vitality to the summers in the town of Lovran, the name of which comes from a word used for the bay laurel, the scent of which infuses the area.
In Volosko, the summer is known as the painting season - the town's numerous visitors try their skills in a painting competition in the old town harbour - the Mandrać. Near this painters' Mecca is the port of Preluk, a premier windsurfing destination, where numerous competitions in that sport are held.

Opatija - What to do, what to see?